I wish I could take credit for this delicious recipe, but I can’t. A friend of mine at work brought this into the office the other day and it was so amazing that I could hardly wait to make it myself. It’s super easy, inexpensive to make, and you can alter the recipe to include all your favorite fruits!

I chose strawberries, blueberries, and blackberries, but whatever is in season at the time would be fine. The possibilities are endless!

When I was growing up, this was one of my Momma’s go-to recipes for week night dinners, and now that I have my own kitchen, I can see why! It’s so fast, easy, and delicious! The prep time is only about 10 minutes, and the chicken only has to bake for 25 minutes, so it’s perfect if you’re tying to hurry and get dinner on the table.

Note: You don’t have to use sour cream and onion chips. This recipe is also great with Ranch Doritos chips, or really anything flavorful. 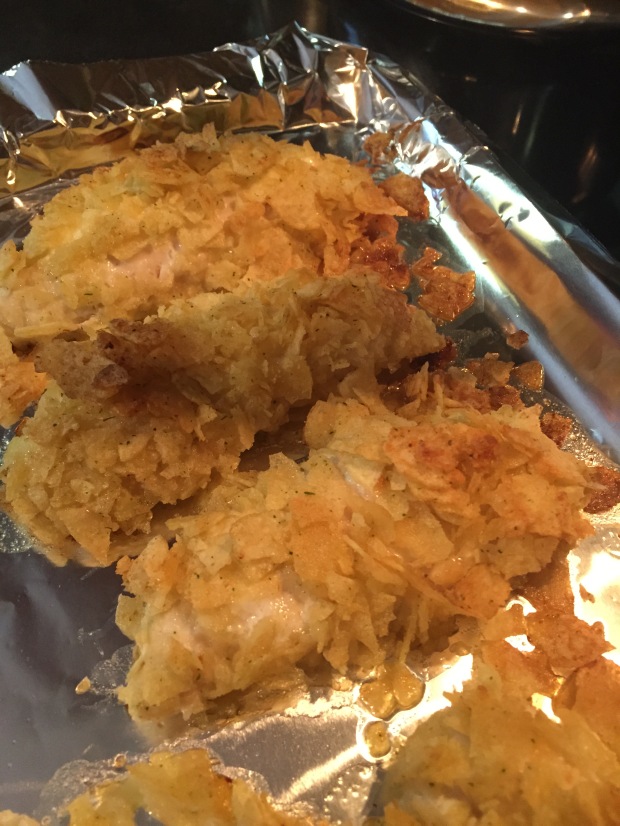 My husband’s favorite dessert of all time is peanut butter pie, so it was only fitting that I find a recipe early on in our marriage that he loves so I can make it for him through the years. I hope I’m making this same pie for him when we’re in our 80’s, partly because I think he’s the dreamiest, and partly because this pie is just that good. 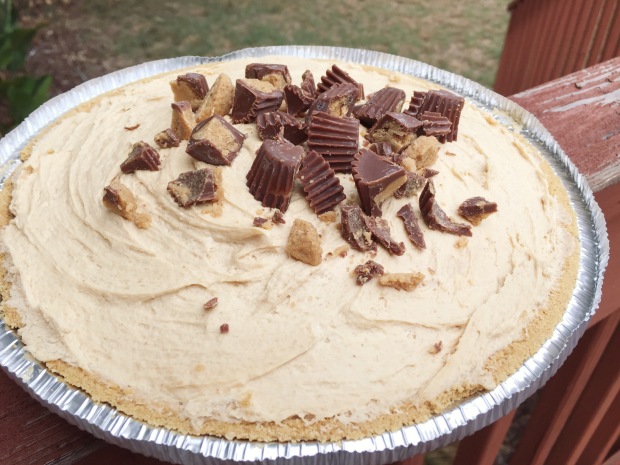 I was so pleasantly surprised by this recipe. These bad boys are GOOD (and knowing they’re a healthy alternative to tacos makes them even yummier!).

What do I love most about zucchini boats? They are so easy to change up for a totally different taste. You can find two other zucchini boat recipes I’m just dying to try here and here.

This was my first time cooking with quinoa and I was a little nervous, but I found it to be quite easy and my husband (who had never even tasted quinoa before) went back for seconds! The creamy sauce is what makes it (and next time I might add a little more bacon)!

After picking peaches on Sunday, I was just dying to try an old fashioned recipe for peach cobbler. I found this recipe to be a little strange, but I’m so glad I gave it a try. I’ll definitely be making it again.

The batter rises to the top while it’s baking, and it should be a beautiful golden brown when you take it out of the oven.

I made these little cuties for the first time this past weekend for our monthly women’s brunch at church, and was so pleased with how they turned out. They could easily be prepared the night before. 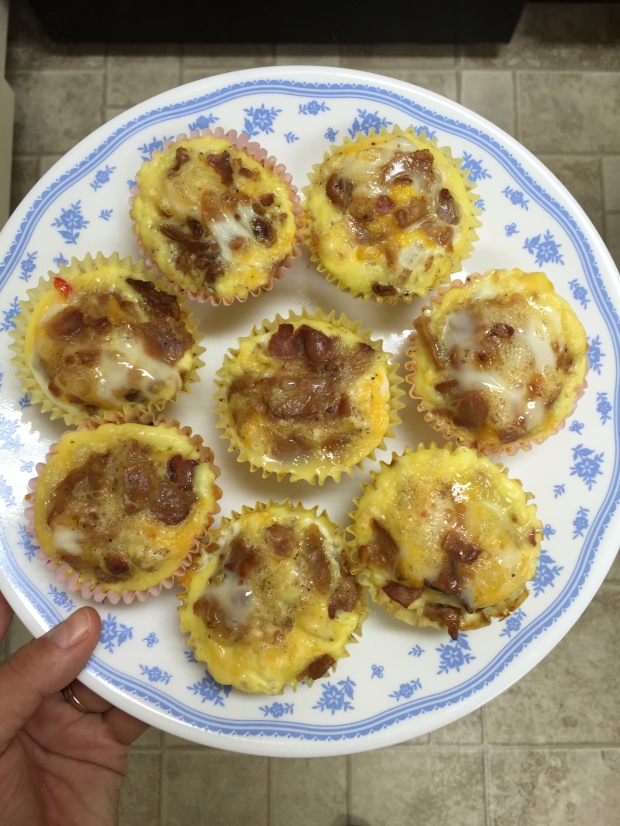 Last night, I surprised my husband with a new recipe and a blanket fort in our living room. The look on his face was priceless, and it was so much fun eating dinner together in this cozy little candle-lit fort. We might just never grow up! Being his bride is the most fun I’ve ever had.

I had never made chicken tetrazzini before, but I was very pleased with the way it came out and the leftovers I had for lunch today were just as good if not better!

Aren’t these truffles just adorable? I whipped them up a few nights ago and could hardly wait to share the recipe. They are so easy to make and you only need 4 simple ingredients. For a girl on the go like me, you can’t beat that!

Viola! Peanut butter goodness that all ages are sure to enjoy!

These cupcakes are sure to be a hit for any occasion. After all, who can resist a cupcake that looks like a miniature pie?

My darling husband sorted through an eight pound bag of M&M’s to separate the greens, blues, and reds. What a guy!

I made four dozen cupcakes, half yellow cake and half chocolate. I researched ways to improve boxed cake mix, and was pleasantly surprised with the results I got from the recipe I tried. The back of the box instructs you to add (to the cake mix) one cup of water, 1/2 cup of vegetable oil, and three eggs. However, if you add four eggs (instead of three), one cup of melted butter that has rested until room temperature (instead of oil), and one cup of milk (instead of water), it makes a remarkable difference. I was afraid the mixture would not be thick enough, but it was just fine. Follow the baking instructions on the back of the box for time and temperature.

Next, comes the homemade buttercream frosting (YUM). The trick here is making sure you’ve let your butter sit out all day, so that it’s room temperature. Mix one box of powdered sugar and three tablespoons of cocoa with a whisk, then, in the mixer, add the stick of softened butter. For four dozen cupcakes, I doubled this recipe.

With my M&M’s separated and after letting my cupcakes cool completely, I began to spread a thin layer of homemade buttercream frosting over the tops of my cupcakes, and immediately covered the top in one color of M&M’s, with the “M” facing down.

Lastly, after filling a piping bag with the buttercream and choosing a flat tip, I iced the top of the cupcakes over the M&M’s, creating the appearance of “lattice.” 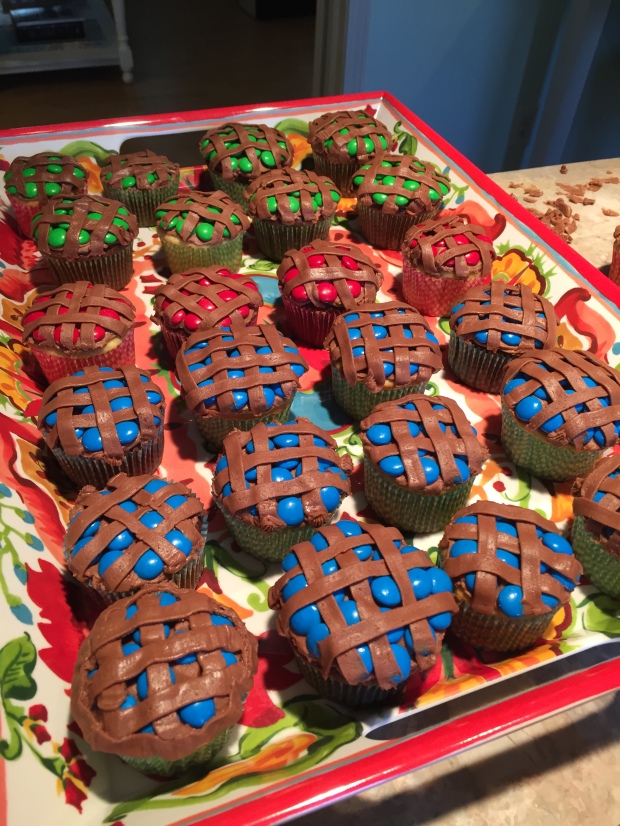 Don’t worry about the little imperfections, they really just make it look more like an actual pie. These little cuties are so much fun, and sure to be a favorite for all ages!

Welcome to my blog! I'm a homemaker in North Carolina with a passion for Jesus, motherhood, and adventure. I can usually be found whipping up something delicious in the kitchen, writing my heart out, or soaking up small town life with my babies and sweet husband, Grayson.

There was an error retrieving images from Instagram. An attempt will be remade in a few minutes.